Highbush Cranberry (not a true cranberry)

The highbush cranberry is actually not a cranberry at all, though its fruit, or ‘drupes’ as they are known taxonomically, strongly resemble cranberries in both appearance and taste. They also mature in the fall, as cranberries do. The two plants are quite different, however. Both are native to North America, but the highbush cranberry is a Viburnum, a member of the Caprifoliaceae, or Honeysuckle family, in contrast to the ‘true,’ or lowbush cranberry, which is a Vaccinium, a member of the Ericaceae—Heather or Heath—family. The Honeysuckle family is comprised of about 400 species, with 11 tree species—and numerous shrub species—that are native to North America. They are located mostly in north temperate regions and in tropical mountains.  In North America, the highbush cranberry stretches from British Columbia east to Newfoundland, south to Washington state and east to northern Virginia, with an isolated population in New Mexico. According to the Natural Resources Conservation Service, the highbush cranberry is listed as ‘endangered’ in Indiana, ‘threatened’ in Ohio, and ‘rare’ in Pennsylvania.

Grows in hardiness Zones 2 through 7. Considered a large and hardy deciduous shrub with a moderate growth rate of up to 3 ft. per year, the plant is typically 8 to 15 feet tall by 8 to 10 feet wide, with arching stems and a very dense, rounded form, making it a popular landscaping choice for use as a screening hedge [For a solid screen, plants should be spaced 2 to 3 ft. apart.]. It is noted for attracting wildlife, especially birds which benefit from the fruit, which can remain on the branches well into mid winter.  It is tolerant of frost, likes sun or semi-shade, and is successful in most soil types but does best in well-drained, moist soil that is rich and loamy.  Established plants can tolerate drought, but they are helped by supplemental watering during such periods. 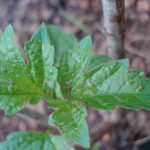 Leaves: Opposite, simple, 3-lobed and 2 to 4 inches long. They are superficially similar to many maple leaves, but have a somewhat wrinkled surface and impressed venation.  They are glossy dark green in the summer but often change to yellow-red or red-purple in the fall. The petiole is grooved and has round, raised glands near the base. 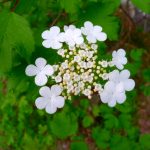 Flowers: It produces flat-top clusters of showy white flowers in June. The clusters are 2 to 3 inches across, with an outer ring of larger, sterile flowers. The flowers are hermaphrodite (having both male and female organs) and are therefore self-fertile, meaning that an individual plant’s flowers can pollinate one another, so there is no need for a second type (or even a second individual plant) to provide pollen and produce fruit. The flowers are pollinated by both wind and insects. 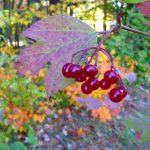 Fruit: Nearly round drupe (drupe: a fleshy fruit with a central stonelike core containing one or more seeds) about 1/3 inch diameter with a single large seed, bright red, juicy and quite acid, like a cranberry.  The seeds ripen from August to September. It does not begin to produce fruit until approximately five years of age.

Edible Qualities: The fruits/drupes can be eaten raw (though not very tasty that way) or cooked, and like cranberries, they are rich in vitamin C and so have a tart, acid taste (the taste is best after a frost and when picked slightly under-ripe). They are an excellent substitute for cranberries and are likewise used in preserves, jams/jellies, sauces, etc., which make delicious condiments for meat and game. The jam reportedly has a very pleasant flavor. ‘Wentworth’, ‘Andrews’, and ‘Hahs’ are three varieties that are examples of the better-tasting, American form (americanum) versus the European form (see note below). And, how does a glass of juice made with highbush cranberries sound to you?  Check out this delicious-sounding recipe courtesy of EdibleWildFood.com.

*Please Note: There is also a European form (species or possibly subspecies) of highbush cranberry (Viburnum opulus) that is described as having inedible/bitter fruit. If you wish to eat the fruit, make sure you plant the true North American species,  Viburnum opulus var. americanum. You will often see “highbush cranberry” listed for sale under its old name, Viburnum trilobum, so many people have had the unfortunate experience of discovering that what they purchased was the European form when they were hoping for the American form.  It may also be worth noting that the European form (opulus) is widely naturalized in central Maine, and a trusted source has written to say that he finds that one–at least in central Maine–more often than he finds the native (americanum) form!  If you are wondering whether or not there is a way to tell the difference between the two types (without the need to taste the fruit), then check out the 3rd bullet in the FAQs section below.

Insect Pests: Reported to have very few insect problems overalll, but one insect in particular—the Viburnum Leaf Beetle (Pyrrhalta viburni P.)—is capable of completely defoliating highbush cranberry stands (complete defoliation has been seen before in Maine–see photos below). Both the larvae and adults of the beetle feed on the leaves, severely skeletonizing them. The trees can survive this injury, however, and can go on to leaf out normally again the following year. Severe damage inflicted yearly, however, will kill the tree.  The Viburnum leaf beetle was introduced from Europe, and in fact the first North American populations of the beetle were discovered on European highbush cranberry plantings in the Ottawa/Hull region of Canada.  There are several fact sheets about the Viburnum leaf beetle on the web, including these three by Cornell, UMass and New Hampshire: 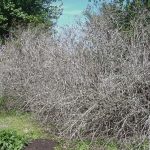 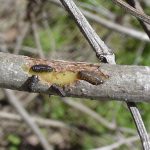 Here is a list of some very good questions we have received over the years, with answers provided from UMaine Extension Specialist in Ornamental Horticulture and retired Professor of Sustainable Agriculture, Dr. Lois Berg Stack. 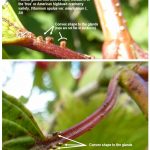 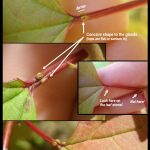