On Sunday, June 25, 2017, the MDACF will be partnering with the Maine Dairy Promotion Board to host the inaugural Cowabunga 5K and Family Dairy Day in Portland, ME. The event will feature a 5K run/walk, local farmers, live calves, educational demonstrations, local and state dairy businesses and organizations, and dairy products for attendees.  Proceeds will be donated to the Howard C. Reiche Community School’s food pantry, which operates through the summer, as part of the Milk2MyPlate program. If you have any questions about the event, contact Jami Badershall at the Maine Dairy Promotion Board, jami@drinkmainemilk.org. 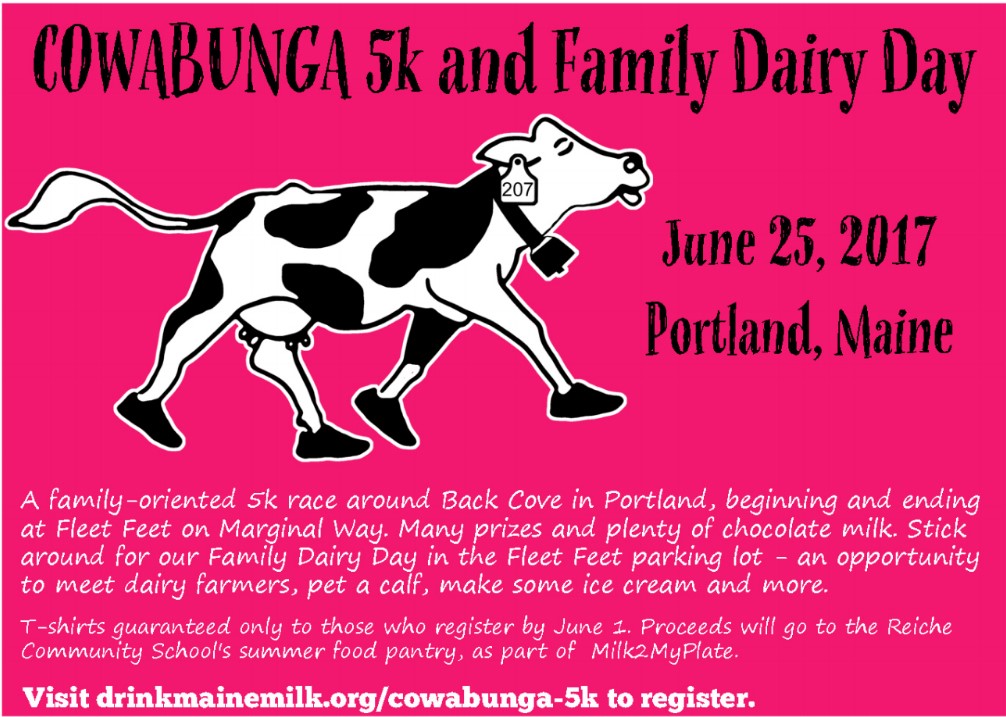 Making the Transition to No-Till Corn/Cover Crop System is a fact sheet that I helped produce with some co-workers in Massachusetts that sets the stage for transitioning your corn crop into a no-till system.

Many farmers in Maine have transitioned to no-till corn and using cover crops to develop and improve their crop rotations, forage quality and profitability. The system also helps improve soil conditions for a dynamic and sustainable system of forage production.

If you want to try no-till this year, please let me know and I can help guide you through the transition.

Four students from the University of Maine competed in the 16th Annual North American Intercollegiate Dairy Challenge® (NAIDC) held March 30 – April 1, 2017. Visalia, CA was home base for the event which included 230 students from 37 colleges across the U.S. and Canada.

Dairy Challenge is a unique, real-world experience where students work as a team and apply their college coursework to evaluate and provide solutions for an operating dairy farm. Seven California dairies participated in this event. For the UMaine students, this was their first opportunity to set foot on a large western dairy farm milking approximately 6,000 cows. The sheer size of the operation provided an extra challenge for the Maine students.

Teams were evaluated on the quality and accuracy of their presentations, the identification of management opportunities and their recommendations to improve animal care and management. Team presentations were evaluated by a panel of five judges, including dairy producers, veterinarians, finance specialists and other agribusiness personnel. In addition to the competition, the students also had the opportunity to hear about the latest research and talk about career opportunities with industry professionals.

The University of Maine team of seniors from the School of Food and Agriculture consisted of Alexa Grissinger, Kambrea Atkinson, Dominic Barra and Dakota Stewart. Dr. David Marcinkowski coached the team. Alexa and Dominic will be attending veterinary school in the Fall while Kambrea and Dakota will pursue careers in agribusiness.

As you can see from the article above, I had the opportunity to visit the dairy capital of the US, Tulare County, CA with the University of Maine Dairy Challenge Team. Tulare County leads the nation in milk production and is home to 285 dairy farms and more than 500,000 dairy cows. The recent drought in California, combine with low milk prices, has caused a lot of stress on these farms. However, when we were there, the surge in spring rains had turned everything green, filled reservoirs, and created a positive attitude among the dairy producers. While there had the opportunity to visit a couple large dairy farms and talked to a number of producers, veterinarians and agribusiness consultants about some of the management practices being employed on local farms.

Estrus detection on dairies is always a problem whether we’re talking about California or Maine. Add 100 degree temperatures in the summer time and getting cows bred in CA can be very difficult. Just like here, many CA farms have resorted to whole herd synchronization programs such as Target Breeding or Presynch.   However it seems that many of the CA dairies are now using the Double Ovsynch protocol (DO). The DO protocol is shown below, and involves four injections of GnRH and two of prostaglandins.

Research has shown that DO can yield conception rates 5-10% higher than Presynch. This increase is especially true in first lactation animals. Just remember to consult with your veterinarian before starting or modifying any synchronization protocol.

California dairies experience a significant slump in conception rates due to the summer heat. One option producers are using to counteract this slump is breeding their herds with fresh, chilled, semen. One local bull stud is providing farms with fresh semen that is collected and distributed the same day. The fresh semen, when stored properly, will remain viable for 1-2 days. Frozen semen is convenient, but the freezing/thawing process kills a significant percentage of the cells. The company selling this product is claiming an 8-10% increase in conception rate with this product, however this claim has yet to be confirmed.

We also noticed that several CA dairies are using In vitro fertilization or IVF to generate embryos. It has been known for some time that pregnancy rates resulting from embryo transfers are much less susceptible to the summer heat than pregnancy rates from standard AI. These farmers are having eggs collected from their best cows and heifers, having them fertilized with sexed semen in a petri dish and then frozen for later implantation. The embryos generated from IVF are then implanted into cows in the hot summer months.  This results in significantly higher pregnancy rates and more constant calving rates throughout the year. By using the best cows, genetic improvement is also accelerated.

The average herd size in Tulare county is 1920 cows. As a result, the herdspeople on these dairies are quite experienced and handle many of the health issues themselves. The role of the veterinarian on these farms has changed significantly. The veterinarians act more as health consultants responsible for developing SOP’s, training farm staff and monitoring herd performance. They only see the tough cases that farm staff can’t handle. Routine procedures like pregnancy diagnoses are done by farm staff or alternate methods. A number of the farms were pregnancy testing cows using milk and/or blood. These tests help producers to identify open cows as early as 28 days and help reduce time to reinsemination.

While we were at the Dairy Challenge we had the opportunity to listen to several excellent presentations. One presentation by Simon Vander Woude, a dairy producer from Merced, was particularly interesting. Simon talked about his use of genomic testing to maximize genetic improvement. Genomics enables a producer to accurately identify the genetic potential of an animal. However simply knowing which animals are good or bad is not enough. Using that genomic information in a management system to get more offspring from the top animals is key to maximizing genetic improvement.

Van Woude Dairy genomically tests all heifer calves. The very elite heifers and cows are identified as IVF candidates and used to produce embryos when they grow large enough. These elite embryos are transferred into the heifers and cows with below average genetics. Animals with above average genetics are bred using sexed to produce heifer calves with above average genetics. The bottom portion of the herd genetically is bred to beef semen producing crossbred beef calves that bring a bonus as feeder calves.

More information on the Van Wouda Dairy breeding program can be found in a short YouTube video.

Highlights: Milk up 1.8% in March, with cow numbers up by 57,000 from last year. All major states up in milk except California and Idaho, Texas and New Mexico booming as compared to last year, Vermont up 0.9%, Class III milk prices at $15-$16 level for next 9 months. Crop prices down a bit, MPP Margins for rest of year above insurable levels of $8 but up just a bit from last month. See MPP Expectations in Table at end of Email).

Production across the US:

Milk Prices: Class III and Class IV prices are down a bit since last month.  Class III prices look to remain at $15 to $16 range with no view of $17 in the next year.  Class IV prices are running $1 or more below Class III prices.  Unless exports, milk powder, or butter takes a jump, cheese will be driving dairy prices for the next 9 months. Margins look think through the coming year with no real reprieve from low prices.

Feed Prices: Prices for corn are down about 5 cents, soybeans down 40 cents, and meal down about $10.  The soybean yield has been good coming out of South America. Planting intentions indicate soybeans my surpass corn acreage this year. Grain farmers are concerned about Trump moves on trade as any moves could lead to decreased US exports, and lower prices.  Lower prices are bad for grain farmers but good for dairy farmers. Lower prices should increase margins over feed costs.

Return over Feed Costs for MPP program: The return over feed costs for March-April is expected at $9.06.  The estimated return over feed costs for the next 12 months drops to $8.76 in May-June and rises to $10.11 for Nov-Dec.  From just 3 months ago, the Expected Returns were all above $10 and now we have a chance to see it drop below $7.50 Let’s hope that the decision of most farmers not to sign up for anything higher than the $4 level remains the right decision for the year. Insurance can be a strange tool, you hope never to use it but glad it’s there if you need it.