Feasibility of Rebaling Large Round Bales of Hay

Farmers can harvest hay more quickly in large round bales, which can be rebaled later into more marketable, smaller, square bales for the equine and small livestock market.

It is estimated that there are about 38,000 horses in the state of Maine. Each needs about 1/2 bale of hay per day when not on pasture. This would be equivalent to about 7 millions bales of hay per year with a value of about $22.5 million.

A University of Georgia study found that the average price beef producers were willing to pay for hay in large round bales was $50 to $60 per ton which is very near the cost of production. But when the same hay was put up into small square bales and marketed to horse owners the price went up to $150 per ton. 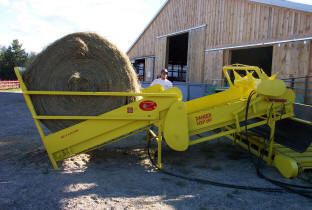 T. Whipple Simpson, designer of the Simpco Inc. hay rebaler, was interested in marketing small square bales. He found he needed a crew of six to bale and stack ten acres of hay or straw a day. With round bales, four people could very easily cover 15 acres a day. He built the hay rebaler to unroll and fluff up the hay from a large round bale and then he used his regular square baler to rebale the hay. He found that his 800 pound round bale valued at $37.50 would yield 19 small square bales weighing 40 pounds valued at $3.25 per bale. This was a $16 gain per round bale without including the extra costs of the square baling operation.

The Franklin J. Witter Center at the University of Maine used a  Simpco Inc. hay rebaler for a number of months. The Center’s preliminary experience showed that 3.5 workers (operator, stacker, loader-floater, and cleanup person) could rebale about 6,000 pounds an hour. They needed two tractors (one for power and one to load) and a square baler. The rebaling operation produced a lot of dust and chaff, so locating the operation in an area that has good ventilation is suggested.

It is important to note that rebaling hay cannot improve the quality of the hay. You need to start with dry hay that has been stored under cover. Hay that has a large amount of spoilage on the outside or bottom of the bale usually binds up the equipment. So those looking for an option for rebaling spoiled hay into small square bales for mulch hay should not rely on this equipment.

Horse hay needs to be dust- and mold-free to prevent respiratory distress in horses. In Maine’s weather, it is a challenge to get the hay cut, dried, raked, and baled and into the barn before wet weather. One method to help reduce the time from cutting and baling is to spray the hay with a buffered acid preservative just as it goes into the baler. Acid-treated hay can be baled at a higher moister level without danger of mold. Acid-treated hays have been fed to horses with no negative effects, and after a brief adjustment period, the horses find the hay quite palatable.

To learn more about the Simpco Inc. hay rebaler, contact T. Whipple Simpson, Route 2, 247F, Cochran, Georgia 31014, 478.934.7863, simpsonfarms@yahoo.com. The preceding does not constitute a recommendation for this equipment and is provided for information only. To see this equipment in use contact: Forage Manager Jake Dyer, University of Maine, Witter Center, at 207.745.6181.

Another value-added hay market being investigated is the “mini-bale” or half a regular square bale that weighs about 20 pounds compared to 45-pound regular bale. The smaller size bale would be easier for horse owners of small stature to handle.

You are welcome to contact the people involved in this project if you have ideas or experience with the equipment that you are willing to share: