Maine AgrAbility Helps Put Bill Hayes Back on His Feet 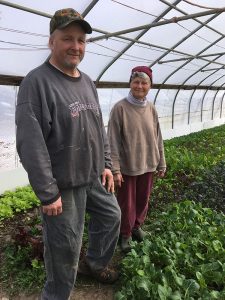 It’s a warm day in March when I met Bill Hayes and his wife, Carol, on their organic farm in Plymouth, 24 miles east of Bangor. He was chopping a ditch through the ice on their driveway to channel the melting water. “You’d never know he doesn’t have any feet,” quipped Carol. 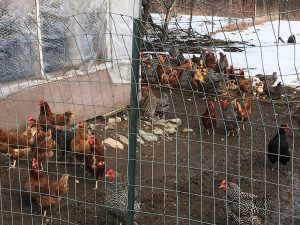 After surgery to amputate both legs below the knees in the summer of 2018, Bill is back at work on Dilly Dally Farm with Carol. They maintain five year-round production greenhouses, each bursting with a succession of greens on this muddy spring day. Bill and Carol have cut nearly 50 cords of wood so far this winter to fuel the outdoor furnace that heats the greenhouses. Their chickens thrive on the spent plants and weeds during the winter. Come summer, Bill will prepare four-and-a-half acres to plant in mixed vegetables and he and Carol will raise broilers and turkeys for market.

Carol has been farming this land for 18 years. She and Bill teamed up 11 years ago. They have a loyal following at the Rockport Farmers’ Market. They attend the Market at Guini Ridge Greenhouses every Saturday all year and have several restaurant accounts.

The decision to amputate

For 25 years Bill dealt with massive arthritis and feet that twisted painfully when he walked because of Compartment Syndrome. Carol says, “It was a long, long road for Bill to get to the point of amputation.” First, his right foot was the biggest problem, then his left became worse and worse. By the time his doctor recommended amputating both feet at once, “I didn’t hesitate,” Bill said. “I knew it was the right thing. My feet were not going to get better.” Although they weren’t sure what the new normal would be, Carol and Bill now say that having both feet done at once was a blessing in disguise. One surgery meant one period of recovery, and Bill had both legs fitted for prostheses at the same time.

Leading up to his surgery in 2018 and during 2019 while he recovered, there was a lot more farm work for Carol to do. “What Billy does is so important—fixing equipment, tractoring in the fields,” said Carol. “When he was out of commission, I couldn’t do nearly as much as I do now.”

What is it like to recover as a double amputee? Bill was in a wheelchair for several months. It was hard, they both agree. “We knew we’d have to make adjustments to everyday life, but we didn’t anticipate how much harder things would be in a wheelchair,” Carol said. They made modifications to make it work. Bill said, “We wash 50-70 dozen eggs a week to sell at market. Carol rearranged the kitchen so I could help her with this.”

Bill credits his doctors, his prosthetist, and his physical therapist for getting him walking and working again. The prosthetist fitted his prostheses and made them comfortable and pain-free. His physical therapist understood Bill’s role on the farm. She had him doing everything, even climbing ladders. “I took my chain saw to therapy,” he said, “And she showed me how to stay balanced, to be careful to stand on even footing.”

Carol credits Bill for being such a good patient and having such a good attitude. She downplays her role, but anyone who has been a caretaker knows that it takes a toll. Bill couldn’t help much and his many appointments took Carol away from the farm—a double whammy. “We worked around it,” said Carol. (Sometimes her daughter was able to help with the driving.)

As Bill got back to work on the farm, he faced some limitations. He contacted Maine AgrAbility to find out more about the program. After an eligibility screening, he was paired with Kelley Spencer, an Assistive Technology Professional and owner of Maine Assistive Technology Solutions. Kelley has worked with the Maine AgrAbility program for many years. She understands agricultural work and is skilled at recommending solutions that will meet specialized employment needs.

Kelley had an initial visit with Bill on the farm in March 2019. He said, “She asked me, ‘What can we do to help you get back to your normal routine on the farm?’” 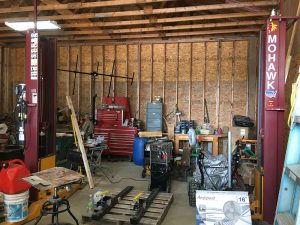 “The biggest thing I need on the farm is a lift,” Bill told her. He had always maintained the farm equipment—a critical role on a farm—and could no longer do it because he couldn’t get down on his knees.

A lift is expensive, and Maine AgrAbility does not have funding for equipment, so Kelley connected Bill with Vocational Rehabilitation.

What is Vocational Rehabilitation?

Voc Rehab or VR, as this program is often called, is part of the state Department of Labor. VR provides funding for equipment necessary to accommodate the employment needs of people with disabilities. In employment lingo, this equipment is called “assistive technology.”

Kelley helped Bill understand what to expect when working with VR. It takes time to go through the application process. By May, Bill had been assigned to a VR Counselor who authorized payment for Maine Assistive Technology Solutions to do a full Assistive Technology Assessment.

The assessment took place in June 2019. Kelley met Bill at Dilly Dally Farm again, and carefully matched his need for accommodations with his capabilities. “Working with Kelley was awesome,” said Bill. 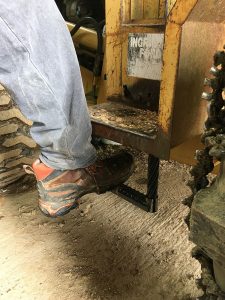 She submitted a report to his VR counselor with a list of equipment that would allow Bill to return to his regular routines on the farm. His counselor authorized the purchases a month later. The list included

The farm is THE focus 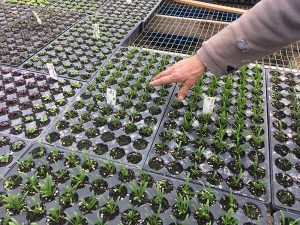 Today, Bill does everything with few limitations. He walks carefully. “I have to watch where I’m going.” There’s no pain. He knows when it’s time to switch out the nylon stocking and the sock he wears over his stump. Carol checks his stumps every night to be sure there are no tender spots or dry skin that can become irritated, painful, and raw. Something small and insignificant can become serious very quickly.

After two seasons adjusting to a “new normal,” Bill is a full partner with Carol on the farm again. “We are a team,” she said. “Maine AgrAbility got Billy back on his feet. Now he has all the tools he needs—it’s been tremendous.”

Bill said, “I can’t emphasize enough to you guys—Maine AgrAbility and VR—how grateful I am.”

The Maine AgrAbility Blog: Gotta Lotta Livin’ To Do

A blog series that deals with issues surrounding aging, farming, and quality of life.

I am a farmer, educator, and consultant to the Maine AgrAbility Program. I raise goats and the forage they eat and tend to the fields and woods of Stearns Hill Farm in West Paris. My grandparents lived here when I was growing up. From my earliest memories, the Farm has held a special place in my heart. 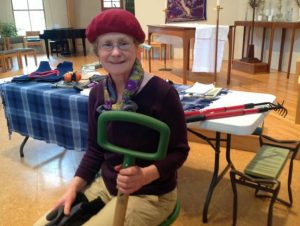