Forages make up a large portion of ruminant animal diets. Nationwide 75 to 90% of all feed consumed by beef and sheep is forage. In addition, a survey of beef producers revealed that producers who grazed cattle longer during the year had lower costs of production compared to producers who fed more harvested forages. Thus, the longer we can keep animals out on pastures harvesting their own forage, the greater the opportunity to keep production costs down. Many dairy farms are now grazing more as a means of lowering production costs. 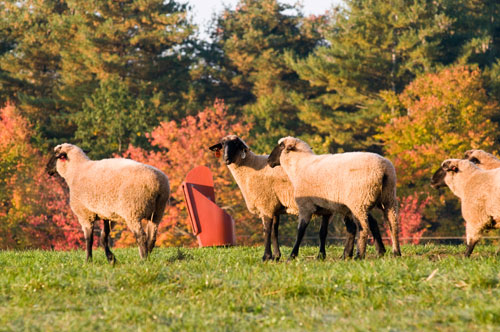 For planning purposes, break the grazing year up into three grazing seasons: 1. spring and early summer (May and June); 2. mid-summer (July and August); and 3. late summer and fall (September and October until we can no longer graze). In addition to the three grazing seasons, we must also consider producing hay for winter feed.

In Maine, many perennial pastures consist primarily of cool-season grasses (bluegrass, quackgrass, fescues, timothy, etc.). These grasses produce most of their growth in spring, grow slowly during mid-summer, and if rainfall is adequate produce moderate amounts of forage in late summer and early fall. This uneven forage growth tends not to meet forage needs of livestock throughout the growing season.

How do we manage pastures to supply forage for as long as possible during the year and produce adequate amounts of hay? It takes planning. To maximize the amount of time animals graze pastures, the most critical period is mid-summer. Supplemental pastures during summer can supply forage when forage is normally limiting. Furthermore, the use of supplemental pastures allows cool-season pastures to rest during mid-summer. This gives cool-season pastures time to regrow and accumulate (stockpile) forage for late summer or fall grazing. In addition, by resting cool-season grass pastures during mid-summer, those plants will be more vigorous and regrow more rapidly when grazing resumes. This lesson will focus on why management during the mid-summer period is so important for extending the grazing season. It will also provide management options for supplying adequate amounts of high quality forage during fall and for managing a productive hay program.