By Sara Bushmann, University of Maine

Welcome to the Pollinator Posts!

On these web pages, I’ll provide updates on some of the pollinator research projects being conducted in (mostly) Hancock and Washington Counties. Look for two more posts this year on or around October 15 and November 15, and then again in April and May for updates on pollinator activity in the spring.

(I gave a quick report of this study at the Blueberry Hill Farm Day gathering in July, 2012.)

This project sprang out of concerns voiced by bee researchers throughout Europe and North America that some bumblebee species are declining. Some of the ideas as to why there are declines include habitat loss, pesticide exposure, and disease. But one suggestion particularly relevant to Maine blueberry agriculture is the idea that commercial bumblebees of the species Bombus impatiens (usually purchased in Maine from Koppert Biological Systems) are transmitting diseases to the wild bees. The suggestion is grounded on the concern that lab-reared bees could build up virulent strains of pathogens that they pass to other bees when they infect a shared resource such as a flower.

I decided to look at one pathogen, Nosema bombi, that infects bumblebees. This pathogen is of the group Microsporidia that are highly modified forms of fungi. In bees, these are parasites of the gut tract.

I asked these questions:

Over two years I dissected 767 bumblebees caught in and around 25 blueberry fields. I found a total of 42 bees infected with Nosema, which means 5.47% of the wild bumblebees- a little less than six out of every 100- are infected. I looked at several factors that might explain why the infection occurred where it did. I looked at pruning methods, pesticide use or non-use, types of pesticides, field size, rotational stage (a fruit-bearing year or not), and whether or not the field ever used commercial bumblebees for pollination.

None of these things offered an explanation for the occurrence of the disease.   According to other studies from other researchers, it is not out of the ordinary to see about 5% of the population infected with Nosema. So, based on my study, I cannot support the suggestion that commercial bumblebees have passed the disease agent Nosema to wild bumblebees.

I did not find evidence of commercial bees transmitting Nosema to wild bumblebees. However, I did find that disease occurrence is not the same for the different species of bumblebees. One bumblebee that used to be common in Maine blueberry fields, Bombus terricola, is in serious decline throughout its range, which includes the northern US westward to the Plains. In a nationwide study, this bee was associated with high levels of Nosema bombi.

In my study I caught 13 B. terricola in three years and 6 of these (almost half) were infected! Compared to all the other species of bees, that is a huge percentage of infected bees.

I knew that B. terricola used to be common in Maine fields.  So, I decided to see how bumblebee species in blueberry fields have changed over several years. 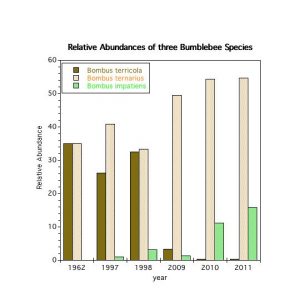 The increase of B. impatiens could mean that commercial colonies produce queens that overwinter and add to the wild populations.

I have found five other bumblebee species in blueberry fields, all of which occur in 10% or less of the population: