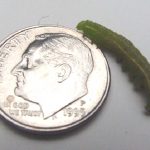 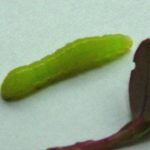 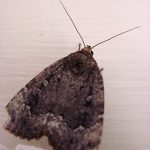 Notes: This pest–with a very prominent hump (see photos)–has an affinity for apples, but in addition to cranberry, it has also been collected from plum, peach, black cherry, flowering almond, and crab apple, as well as on 20 deciduous trees and shrubs (basswood, elm, oak, white birch, and willow especially). It goes through just one generation per year. Its numbers in Maine looked for awhile to be on the rise most everywhere, but their numbers have been low for a decade or more now, and generally only a few are found per set of 25 sweeps at any one time (but . . . add the number of these together with False Armyworm larvae, blossomworms, or any cutworm species found, when checking against the action threshold of 4.5 larvae per 25 sweeps; Humped Green Fruitworm is not a cutworm itself but is in the same family as cutworms and so is relatively closely related to them).

It is important to remember that the humped green fruitworm is in its larval stage early in the cranberry season, and so all of its feeding is done solely on early-season foliage as opposed to the berries themselves. It will feed on vines during the day and will not leave the vines at night to rest in the soil like cutworms do.