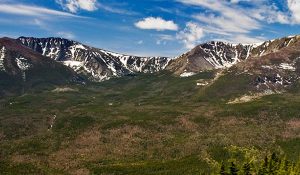 With regular features and information about climate in Maine and beyond, Maine Climate News is a joint effort of three of the University of Maine’s well-known units: the Climate Change Institute, Maine Sea Grant, and Cooperative Extension. All of these entities have an emphasis on climate change and its implications for Maine.

The site is intended to provide useful information and perspectives about Maine’s climate. Because climate represents long-term patterns (as opposed to the short-term weather records that are provided daily by the National Weather Service), we will review what is known about the past (paleoclimate), the present (weather data compiled from roughly the past century, the time of modern instrumental measurements), and the future (estimated from computer simulations of various kinds). 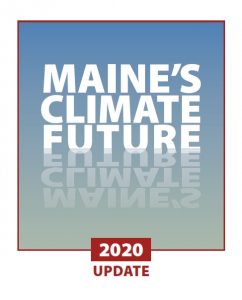 Maine’s Climate Future – 2020 demonstrates the progression of accelerating change in the climate in Maine and its effects, reflecting dramatic evidence for accelerating climate change around the globe with the often dire consequences of those changes.

Nearly every climate-related parameter measured in Maine is accelerating, according to the report. The rate of air and sea warming is increasing. Precipitation is increasing in intensity and volume, and sea level is not only rising, but rising faster than in the previous century.

Key new findings include faster rates of warming along the coast compared to interior and northern Maine, and changes in Maine winters. Average minimum temperatures in Maine are warming 60% faster than average maximums.

The report points to the growing evidence of impacts of these changes on Maine’s farms, fields, forests, marine resources, and aspects of our culture and economy. The report also points to resources and activities that represent opportunities to address the climate challenge, and actions that Mainers are taking to deal with climate-related changes

“This report hopes to connect Maine people with the information they need for decision-making,” says Ivan Fernandez, UMaine professor of soil science and forest resources, and the report’s lead author.

“This 2020 update, while alarming, affirms that Maine people have the will and capacity to thrive in uncertain times,” says Catherine Schmitt, Schoodic Institute science communication specialist and a co-author of the report.

The Maine statewide fall (September-November [SON]) 2019 average temperature was 43.8 °F, ranking 55th coolest (71st warmest) for the 125-year record period beginning 1895. This temperature is 1 °F warmer than that observed for the same period in 2018, and equal to the 1901–2000 historical mean.  The observed SON total precipitation was 12.9 inches, ranking 37th wettest (89th driest) on record since 1895.  This precipitation amount is 0.9 inches less than that observed in 2018, and 1.6 inches above the 1901-2000 historical mean.  In total, there were 12 high and 56 low daily temperature, and 69 high precipitation records either broken or tied statewide during the fall season.  All 56 low daily temperature records were set in November (data from NOAA Daily Weather Records).

The Maine statewide 2019 JJA average temperature was 64.1 °F, ranking 33rd warmest for the 125-year record period beginning 1895. This temperature is 1.2 °F cooler than that observed for the same period in 2018, and 1.4 °F warmer than the 1901–2000 historical mean. The observed JJA total precipitation was 12.6 inches, ranking 36th wettest on record since 1895. This precipitation amount is 1.1 inches greater than that observed in 2018, and 1.6 inches above the 1901-2000 historical mean. In total, there were 18 high and 6 low daily temperature records, and 69 high precipitation records either broken or tied statewide during the summer season (for detailed lists see the National Center for Environmental Information [NCEI] Daily Weather Records).

The statewide spring (March–May) 2018 season average was slightly warmer and drier than normal in comparison to 1901–2000 climatology. Spring snowpack at the beginning of April was less than in 2017, but considerably more than in 2016. On the larger scale, sea-surface temperatures across the subpolar and tropical latitudes of the North Atlantic cooled in response to persistent strong winds associated with the positive phase of the North Atlantic Oscillation.

Following the record warmth in winter 2016, winter 2017 (December – February) was warm and wet. Spring 2017 was generally cool and wet. Increased snowfall and a longer snow season compared to last year contributed to easing of the 2016 drought. Climate in Maine and across the Northern Hemisphere is heavily impacted by the declining extent and thickness of Arctic sea ice.

Research Highlights: Uncovering the Past Through Maine’s Historic Phenology Data

Phenological observations of annual first flowers, first leaves, and first migratory bird arrivals are a very valuable component of climate change research and historical phenology records provide baselines for learning about the effects of climate change on biota and biological processes. Dr. Caitlin McDonough’s research delves into long-term historical phenology records, such as the Quackenbush journals of northern Maine, to identify the fingerprint of anthropogenic climate change in ecological communities.

The purpose of the Maine Climate and Agriculture Network, initiated by faculty at the University of Maine, is to increase communication and coordination among those working on issues related to climate and agriculture. The Maine Climate and Ag Network website provides an initial portal to some of the climate-related activities at the University of Maine, and serves as an invitation to those with an interest in this topic to participate.