Description: The adult female American dog tick is approximately ¼ inch long when unfed and up to ½ inch or longer when fully engorged. Males tend to be slightly smaller. Adult females are typically a reddish-brown color with a creamy-white dorsal shield or scutum on the back, directly behind their head. Adult males are also a reddish-brown color, but with cream or gray colored markings covering their entire back.

Habitat/Range: The American dog tick is widely distributed east of the Rocky Mountains and can also be found in certain areas along the Pacific Coast. It is relatively common in Maine and can be found throughout much of the state, particularly in southwestern Maine. Compared to other tick species, the American dog tick is quite resistant to drying out, thus it may be found in drier habitats including open fields and lawns in addition to forested areas.

Life Cycle/Hosts: The American dog tick is a three-host tick, meaning they utilize a different host at each of their three active life stages (larva, nymph, and adult). Completion of the life cycle can vary based on host availability and environmental factors and may take up to two years. A blood meal is required for development from one life stage to the next and for egg production in adult females. Larvae typically feed on small mammals and have shown a preference for white-footed mice and meadow voles. Nymphs tend to prefer medium sized animals such as raccoons and opossum, while adults prefer larger hosts including dogs, deer, and humans. Adults are generally active from April to August with peak activity in May and June. They are no longer active in October and November when adult deer ticks are at peak activity. 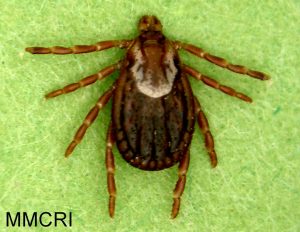 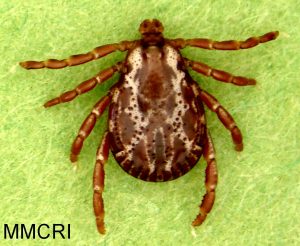 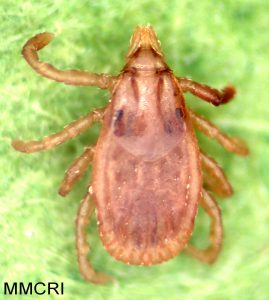