Description: Lone star ticks tend to have a more rounded body shape than other tick species. Adult females are approximately ¼ inch long and up to ½ inch or longer when fully engorged. Coloration ranges from reddish-brown to tan, with adult females being distinguished by a single white spot on the back. The color of this spot can vary from white to cream or bronze/gold and may take on an iridescent look at close range. Adult males typically have light colored patterns along the outer margins of the body.

Habitat/Range: Lone star ticks are most abundant in the southeastern United States, though their range does extend to northern portions of the country, including southern and coastal Maine. They are often found in dry forested sites with shrub undergrowth and along rivers and streams near animal resting places. In Maine, lone star ticks are relatively rare in comparison to the state’s other tick species, but they are being found more frequently than in the past.

Life Cycle/Hosts: Lone star ticks are considered three-host ticks because they utilize a different host at each active life stage (larva, nymph, and adult) in order to complete their life cycle. The most common host for all three stages of lone star tick is the white-tailed deer, though they also feed on a wide variety of other hosts including humans. 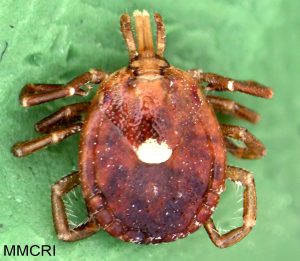 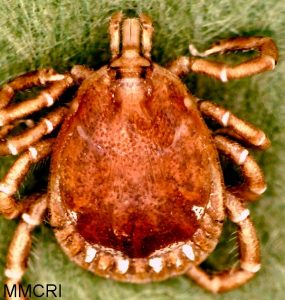 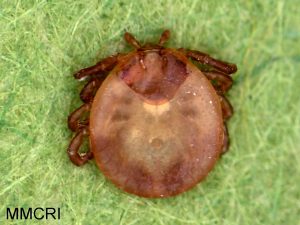