Description: Rabbit ticks are quite small, less than 1/8 inch in length. Adults are a tan to reddish-tan color, with females having a slightly darker dorsal shield or scutum on the back behind the head. Nymphs are similar in color to adults but are much smaller.

Habitat/Range: Rabbit ticks are widely distributed throughout the United States, Canada, Mexico, and into South America. In Maine, rabbit ticks can be found in a variety of forested habitats, including deciduous, coniferous, and mixed forests, and even intensely managed tracts.

Life Cycle/Hosts: The rabbit tick is a three-host tick, meaning it utilizes a different host at each of its three active life stages (larva, nymph, and adult). They are found from spring through summer with numbers declining significantly during fall. Immature rabbit ticks prefer to feed on ground-dwelling birds, particularly ruffed grouse, as well as small mammals. Adults feed primarily on rabbits and are often found on or around the ears. Rabbit ticks typically do not feed on humans.

Medical/Veterinary Importance: Although rabbit ticks can serve as reservoir hosts and vectors of Rocky Mountain spotted fever and tularemia within rabbit and rodent populations, disease transmission to humans is rare. While not a serious threat to humans, large infestations of rabbit ticks can weaken and even kill small animal hosts. 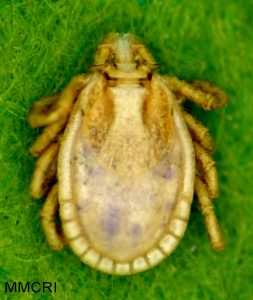 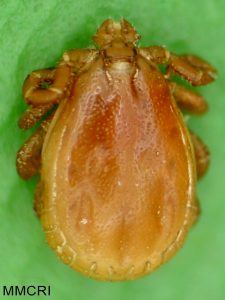 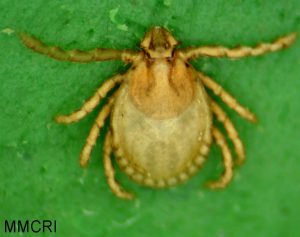