Description: Adult females are typically less than 1/8 inch in length and males are slightly smaller. Adult females are brown to reddish-orange in color with a dark brown to black dorsal shield or scutum on the back, directly behind their head. After feeding, adult females can increase in size to as much as ½ inch in length and can range from a tan color to gray or dark brown. Adult males tend to be dark brown in color with no reddish coloration on the body. Adults have dark brown or black legs, thus the common name “black-legged” tick. Deer tick nymphs are very small, about the size of a poppy seed, and can be difficult to see. The six-legged deer tick larvae are even smaller, typically less than 1 mm.

Habitat/Range: Blacklegged ticks are widely distributed in the eastern United States from Maine to Florida and westward around the Great Lakes. In Maine, they are most common in southern and coastal areas, but populations are advancing inland and have been found in northern Aroostook County. Blacklegged ticks are commonly encountered in mixed forests and along the woodland edges of fields and suburban landscapes.

Life Cycle/Hosts: The blacklegged tick is a three-host tick, meaning it utilizes a different host at each of its three active life stages (larva, nymph, and adult). It undergoes a two-year life cycle, beginning during the spring when an adult female lays several thousand eggs in the leaf litter. In early summer, tiny six-legged larvae emerge from the eggs and begin feeding on their first host, usually a small mammal. Many of these hosts, particularly mice and chipmunks, are infected with the agent that causes Lyme disease and transmit it to the larval ticks. Following a molt from the larval stage, nymphs generally feed on small to mid-size animals while the subsequent adults prefer deer. All stages will feed on humans and domestic animals. Adult blacklegged ticks are found from early spring to late fall with two peaks, one in April or May and another in late October. Nymph numbers peak in June and early July.

Medical/Veterinary Importance: In Maine, blacklegged ticks are vectors of several serious tick-borne diseases including Lyme disease, anaplasmosis, babesiosis, and Powassan virus. It is extremely important to check for and remove ticks from humans and pets as quickly as possible. 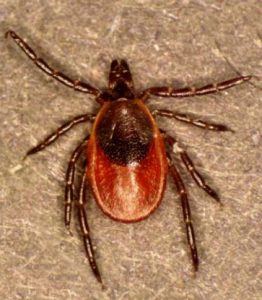 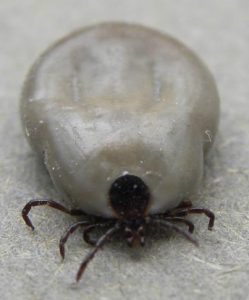 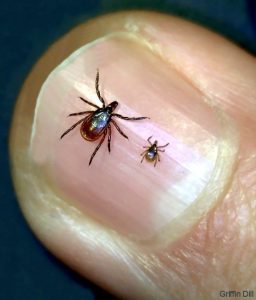