Description: Squirrel ticks are generally larger than some of the other Ixodes species. Adult females are typically a tan color with a darker dorsal shield or scutum on their back directly behind the head. Males are a reddish tan color and tend to be slightly smaller than the females.

Habitat/Range: Squirrel ticks are distributed widely in the eastern United States, particularly in the Northeast. They can be found throughout much of Maine, but are primarily found within the nests of their hosts. They are also frequently found in abandoned or seasonal buildings where squirrels have taken up residence.

Life Cycle/Hosts: As their name suggests, squirrels are the principal hosts for the squirrel tick, though they have also been found on other small to medium-size mammals, including other rodents, raccoons, foxes, and rabbits. Squirrel ticks occasionally bite humans, but it is not common.

Medical/Veterinary Importance: Though they are not associated with the transmission of Lyme disease, squirrel ticks are known to be vectors of Powassan virus. 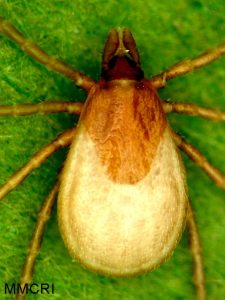 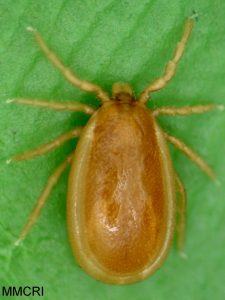 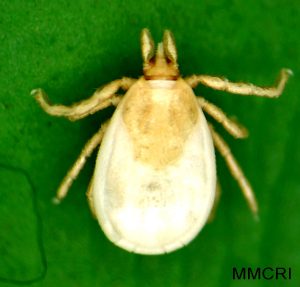