Description: Adult females are between 1/8 and 1/4 inches in length and may grow to 1/2 inch after feeding. They are a reddish-brown color with no distinctive body patterns. Males are similar in color but are slightly smaller in size.

Habitat/Range: The brown dog tick is widely distributed throughout the world but is most commonly found in warmer climates. They are typically associated with human habitation, particularly where domestic dogs can be found. In Maine, brown dog ticks are rare and not found in nature. They are most commonly encountered in kennels and other areas with communal housing of dogs.

Life Cycle/Hosts: The brown dog tick is a three-host tick, meaning it utilizes a different host at each of its three active life stages (larva, nymph, and adult). In all stages, it feeds primarily on dogs, but will occasionally feed on other hosts. They are unlikely to feed on humans, though they can be found in homes and even on beds where dogs are present. The brown dog tick is well adapted to indoor living and unlike other tick species can complete its entire life cycle indoors.

Medical/Veterinary Importance: Brown dog ticks have been known to transmit the bacterium that causes Rocky Mountain spotted fever but no cases have been reported in Maine. They are also an important vector of disease in dogs. Canine ehrlichiosis and canine babesiosis are transmitted to dogs through the feeding of brown dog ticks. 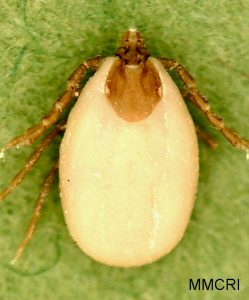 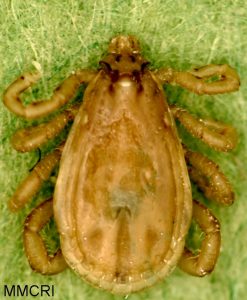