Description: Adult female woodchuck ticks are approximately 1/8 inch in length (about the size of a sesame seed) and males are slightly smaller. Adult females are a tan to reddish-tan color with a darker dorsal shield or scutum on the back, behind the head. Larvae and nymphs are a slightly lighter tan color and are much smaller than adults. Woodchuck ticks are similar in appearance to deer ticks (Ixodes scapularis) thus microscopic identification may be necessary to differentiate between the two species.

Habitat/Range: Woodchuck ticks can be found anywhere east of the Rocky Mountains, particularly in New England, the northern Midwest, around the Great Lakes, and into southern Canada. They are among the more common tick species in Maine, though they are typically found in and around the dens and nests of their host.

Life Cycle/Hosts: Woodchuck ticks most commonly feed on woodchucks and other small mammals, including raccoons, foxes, skunks, weasels, porcupines, dogs, and cats. They have also been found to feed on a number of bird species including robins. Woodchuck ticks will occasionally feed on humans. The life cycle of the woodchuck tick is highly dependent on environmental conditions and host availability. Woodchuck ticks can be encountered throughout the summer months with numbers peaking during July. The ability of woodchuck ticks to live for long periods without a blood meal allows them to survive for a year or more without a host.

Medical/Veterinary Importance:  Woodchuck ticks may carry the bacteria that causes Lyme disease, but are not generally associated with Lyme disease transmission. They can, however, transmit Powassan virus, a potentially deadly tick-borne illness. 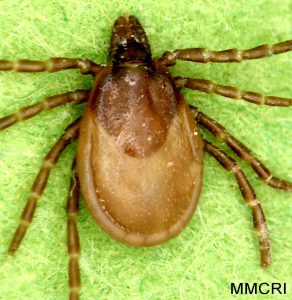 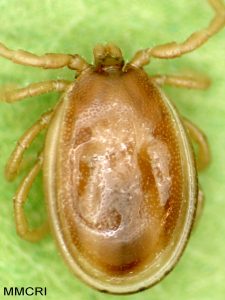 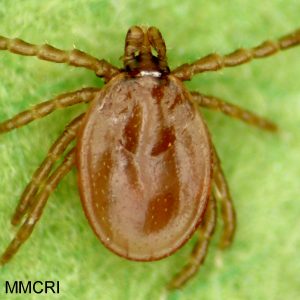