Description: Winter ticks are approximately ¼ inch in length, with females reaching ¾ inch when fully engorged. Adult females are typically reddish-brown in color with a creamy white dorsal shield on the back, directly behind the head. Adult males are a dark brown color with a white crosshatch pattern on their back.

Habitat/Range: The winter tick has a large geographic distribution in North America. They can be found coast to coast through much of Canada and the United States ranging from the Yukon Territory in the north to along the Mexican border in the south. They can be found in a wide variety of habitats, but are strongly associated with the presence of moose. Winter ticks are found in forested areas throughout the state of Maine, particularly in central and northern counties.

Life Cycle/Hosts: The winter tick is a one-host tick, with all three active life stages (larvae, nymphs, and adults) feeding on the same individual. They produce one generation per year, with larvae hatching and questing from late summer through fall. Large numbers of these tiny larvae are commonly encountered by hunters in the fall. The ticks will feed and remain on their host during their subsequent molts until spring when adult females detach and drop to the ground. Eggs are laid in June, after which the adult females die. Winter ticks are most commonly encountered in fall and winter. Their preferred hosts are moose and other ungulates, including deer, elk, and caribou, and occasionally horses and cattle. Though they can be found anywhere on a host, they seem to prefer the ears, belly, anal region, and under the legs. Incidental hosts include dogs, beavers, black bears, and coyotes. Winter ticks rarely bite and feed on humans.

Medical/Veterinary Importance: Although winter ticks are not a threat to human health, they can pose a significant threat to wildlife, moose in particular. Deer and other ungulates seem to easily remove the ticks during grooming. Moose, however, are not as successful at tick grooming and can become host to over 100,000 winter ticks. Heavy infestations on an individual can result in severe anemia, skin irritation, hair loss, and distraction from feeding. The total effect from heavy infestations can ultimately result in death of the individual. 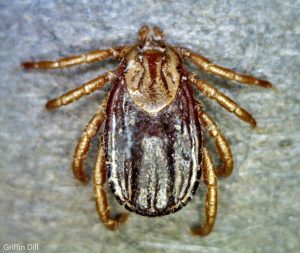 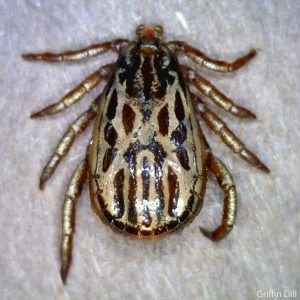 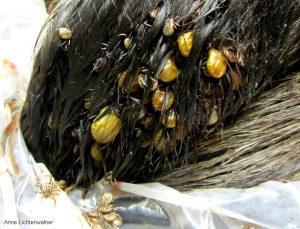