Description: Adult Gulf Coast ticks are roughly ¼ inch long and up to ½ inch or longer when fully engorged. Adult females are a dark brown to reddish-brown color with an ornate, light-colored scutum on their dorsal surface, directly behind their head. The ornately patterned scutum encompasses the entire dorsal surface of the adult male Gulf Coast tick.

Habitat/Range: Gulf Coast ticks are most abundant in the southeastern United States along the Gulf of Mexico. Though they have been incidentally found in Maine on rare occasions, they are not considered to be established within the state. They typically inhabit grassland prairies and forest edges within the coastal uplands of their home range.

Medical/Veterinary Importance: Gulf Coast ticks are known vectors of the causative agents of rickettsiosis, canine hepatozoonosis, and heartwater, and they are also known to cause the serious medical condition known as tick paralysis. 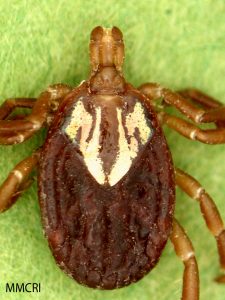 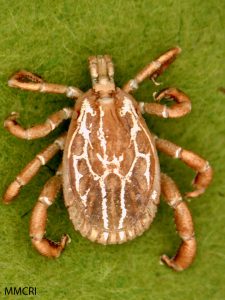 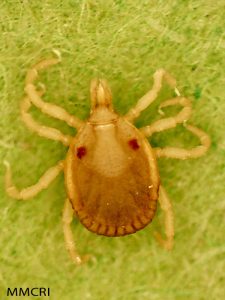