Description: Adult females are typically 1/8 inch or less in length and up to 1/2 inch when engorged. Color of adult females can vary from tan to brown with a darker dorsal shield or scutum on the back, directly behind the head. Males are similar in size and color but lack the dorsal shield and have rounded or rectangular shaped formations, known as festoons, along the bottom margin of the body.

Habitat/Range: The seabird tick is widely distributed along coastal habitats across the world and is the only tick species present in Antarctica. In Maine, seabird ticks can be found on offshore islands in seabird nests, questing on grasses, and underneath rocks and debris.

Life Cycle/Hosts: The seabird tick is a three-host tick, meaning it utilizes a different host at each of its three active life stages (larva, nymph, and adult). They feed almost exclusively on marine birds including puffins, gannets, cormorants, and penguins, though on rare occasions may be found on humans. The seabird tick life cycle generally takes between two and four years to complete.

Medical/Veterinary Importance: The seabird tick is a potential vector for disease though its rare interaction with humans makes disease transmission unlikely. 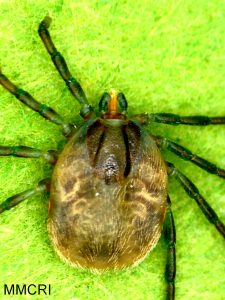 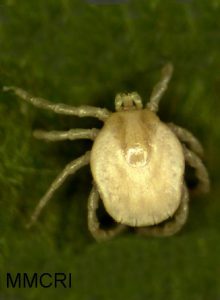