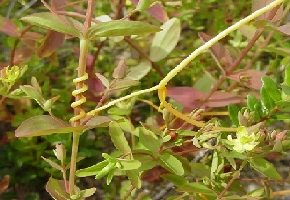 Genus: Cuscuta | Species: At least 15 are found in the eastern U. S. and all are difficult to distinguish from one another.

Description: [Rare on Maine cranberry beds but it still shows up now and then] Also called golden-thread or love vine; A climbing, parasitic, yellow or orange vine that produces small, dense clusters of tiny white, bell-shaped flowers; Leaves are reduced to a few very tiny scales; Vines tightly wrap around the stems of cranberry (and other) plants and absorb their liquid contents through tiny suckers; it needs other plants to serve as a host before it can attach to cranberry vines. [annual]

Control: Pull and destroy plants infested by the dodder prior to the dodder setting its seeds because the seeds are so numerous and can spread so easily – It is best to pull the dodder-infected upright(s) out of the bed, or else the dodder may sprout again from inside the upright(s). In addition, it is advised to “flag” the area(s) where the dodder is found in order to monitor for additional dodder plants from day-to-day. Seeds may spread via wind or floodwaters.

Habitat: On a variety of plants in moist, low ground; 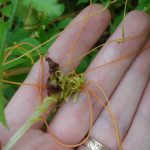 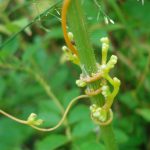 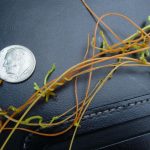