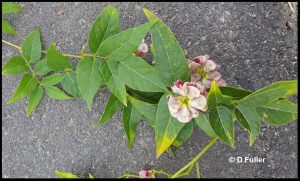 Description: A climbing vine with maroon or reddish-brown pea-like flowers in compact racemes arising from the leaf axils. The fruits are small pods which look like miniature bean or pea pods containing about five small, hard seeds. Flowers 1/2″ long; keel (two fused lower petals) are scythe-shaped and upturned; They are light to medium purple, with darker and lighter markings, and are grouped in clusters. Leaves are 4-8″ long, pinnately compound, with 5-7 ovate to lanceolate leaflets. Vines can reach 10 feet long. In cranberry beds, the vines grow among and over top of the cranberry vines, forming dense, twisting & tangled mats. Cranberry vines may die in areas of heavy wild bean growth.  Wild bean can spread extremely rapidly on cranberry beds. Its small, potato-like tubers underground help it to overwinter and to spread.  The tubers must be removed if control is to be achieved. [perennial]

Notes of Interest: One way to remove the tubers would be to eat them, just as Native Americans and the Pilgrims were accustomed to doing.  The Pilgrims relied on them as a food source during their early years in Massachusetts.  The tubers can be used in soups and stews or fried like potatoes; the cooked seeds can also be eaten.