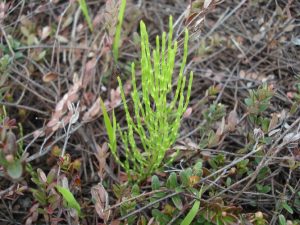 Description: Equisetum, though distributed world-wide, is the only surviving genus of the horsetail family, with just 35 living species. It is probably the most ancient plant family alive today, resembling taller plants that dominated the landscape during the dinosaur age. The stems are jointed and hollow; leaves whorled, scale-like, non-green, and somewhat similar to fir needles; Horizontal, vegetative rhizomes beneath the soil/sand surface; Reproductive part of the plant is a very straight, leafless and brown stalk bearing a cone-like strobilus at the tip, within which spores are formed and later released. The reproductive stems/stalks appear to be separated from the green, leaf-possessing stems, but the two types of stems are connected together by the underground rhizomes. [perennial]

Control: Since field horsetail does particularly well in neutral or slightly basic soils, make sure the pH of your cranberry bed is acidic; Improve your bed’s drainage as well since it does very well in wet areas.

Production of spore-producing stalks: Early May 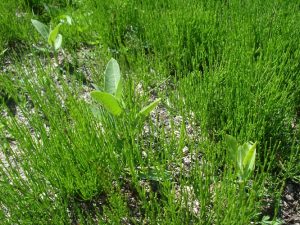 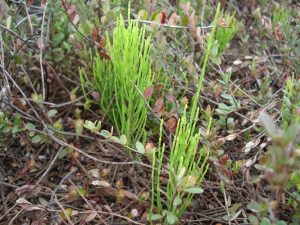 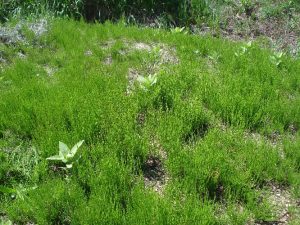